The aim of Single Day-ahead Coupling (SDAC) is to create a single pan European cross zonal day-ahead electricity market. An integrated day-ahead market will increase the overall efficiency of trading by promoting effective competition, increasing liquidity and enabling a more efficient utilisation of the generation resources across Europe.

SDAC is an initiative between the Nominated Electricity Market Operators (NEMOs) and Transmission System Operators (TSOs) which – in the framework of CACM implementation – enables cross-border trading across Europe via implicit auctions for delivery of power for the following day.

Significant progress has been achieved in the establishment of a pan-European Single Day-Ahead Coupling in recent years, thanks to early implementation initiatives and pilot projects. SDAC relies on the Price Coupling of Regions (PCR) solution developed by a group of power exchanges. At this stage, the SDAC is in an interim phase during which two parallel market couplings co-exist, i.e., the Multi Regional Coupling (MRC) and the 4M Market Coupling (4M MC). These couplings are considered on an equal basis as jointly forming, for this interim period, the Single Day-Ahead Coupling in implementation of CACM. In the enduring stage MRC and 4M MC shall be coupled.

The parties involved are:

The governance of the SDAC consists of three layers:

Therefore, the governance structure is headed by a Joint Steering Committee (JSC) that includes representatives of all the parties involved. The JSC activities are supported by horizontal groups which address the legal, financial and communication aspects of the coupling. Furthermore, there are three joint groups which deal with the following operational aspects: Market & System Design, Procedures and Operation. 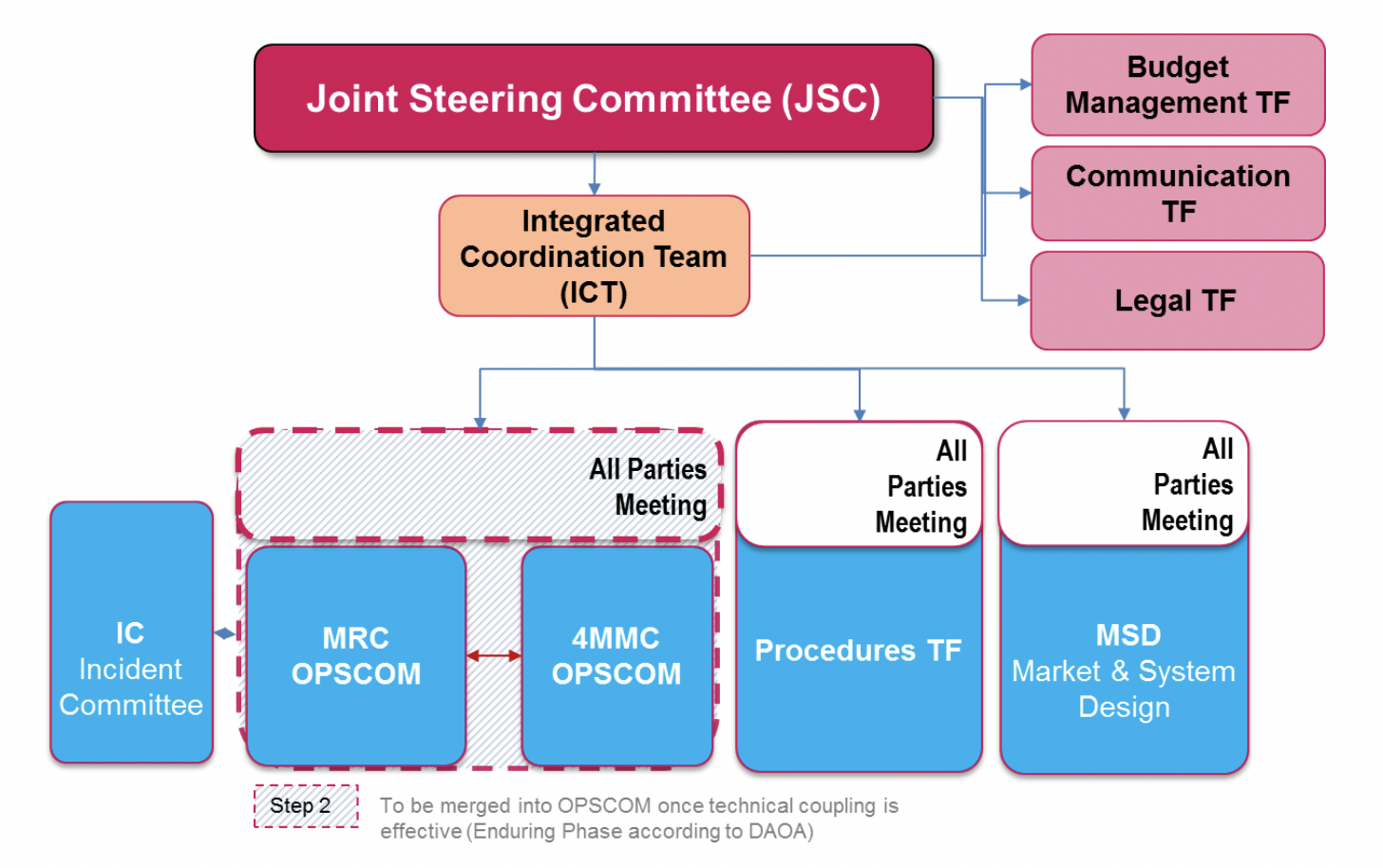 What does SDAC do?

Day-ahead market coupling requires processing input from all involved NEMOs and TSOs – essentially bids and offers and network capacities and constraints – matching them by operating one single algorithm, and lastly validating and sending outputs, such as matched trades, clearing prices, and scheduled exchanges, to NEMOs and TSOs. These procedures occur within precise and tight timelines, while ensuring optimal economic solutions, high performance, and robustness.

The SDAC makes use of a common price coupling algorithm, called PCR EUPHEMIA, to calculate electricity prices across Europe and to implicitly allocate auction-based cross-border capacity. Both the MRC and the 4M MC apply PCR EUPHEMIA that will also be the IT asset for the execution of market coupling following the merge of the two abovementioned couplings.

PCR EUPHEMIA matches energy demand and supply for 24 hours simultaneously. The algorithm runs a combinatorial optimization process based on (i) the modelling of the matching problem (ii) the implementation of dedicated branch-and-bound strategies and (iii) the utilization of a standard optimization solver. The code of the algorithm uses Java and is interfaced with the matching system via an Oracle database.

Since its launch PCR EUPHEMIA has been continuously developed further. The most recent major development has been the integration of multi-NEMO requirements.

PCR EUPHEMIA is largely compliant with CACM requirements and the final target is to complete SDAC and ensure full CACM compliance. Further, PCR EUPHEMIA as an “existing solution” has been proposed in the context of Single Intraday Coupling for the execution of intraday auctions for the pricing of cross-border capacity (IDAs). Notwithstanding the important achievements of the PCR EUPHEMIA, cycles of Research and Development (R&D) are being planned in order to support further extensions of the market coupling, new market designs and higher quality of performance, such as:

This R&D cycle, called Euphemia-Lab has already been initiated. The R&D programme is a joint approach of NEMOs and TSOs with periodic reporting to institutions and stakeholders. The R&D programme consists of researching a list of potential solutions to improve the target KPIs. Priority is given to improve CACM requirements and the most problematic root cause of the numerical problems in EUPHEMIA. It is to be noted that research on a topic takes at least 6 months and subsequent integration into production takes at least one year.