The new ENTSO-E leadership team was confirmed today by the association’s Assembly and will take office as of 1 July. This newly elected team is led by the President, Mr Hervé Laffaye, International Officer in charge of International and European Affairs at RTE, the French transmission system operator; the Vice-President, Mr Zbyněk Boldiš, Director of the International Affairs Section of ČEPS a.s., the Czech transmission system operator; and the Chair of the Board, Mr Joachim Vanzetta, Director System Control of Amprion GmbH, one of the four German transmission system operators (TSOs). The ENTSO-E leadership also includes the Vice-Chair of the Board. Mrs Pascale Fonck, Chief External Relations Officer at Elia System Operator SA, is ending her second mandate as Vice-Chair of the Board on 30 June. The new Vice-Chair of the Board will be elected in the first regular meeting of the new Board after the Summer. Mr Laffaye, Mr Boldiš and Mr Vanzetta will be serving their second mandate at the head of ENTSO-E.

Hervé Laffaye declared: “I am very thankful to the ENTSO-E Assembly for re-electing me as President. I look forward to continuing to deliver together with the Chair of the Board, Joachim Vanzetta, the Secretary-General, Sonya Twohig and her team, on ENTSO-E’s important mission. European TSOs, cooperating in ENTSO-E, ensure the security of one of the largest interconnected grids in the world, the optimal functioning and development of interconnected markets, as well as the integration of renewable energy sources and of emerging technologies. I am very honoured to be leading for a new mandate the professional European association of TSOs which as independent, neutral and regulated entities, act in society’s interest.”

Joachim Vanzetta said: “I want to express my deep gratitude to all European TSOs united in ENTSO-E for their trust and for the re-election as Chair of the Board. I take this as a unique opportunity to further develop the association based on our aligned vision and goals. I will do my utmost to ensure that the common mission of ENTSO-E – being the enabler of the climate-neutrality objective by 2050 in line with the European Commission’s Green Deal initiative – is put into practice, while actively contributing with our TSO expertise at the European level. It will require multiple solutions including energy system integration, onshore/offshore developments, closer cooperation with DSOs but also digitalisation and innovation. ENTSO-E will have a key role to play in facilitating the needed cooperation and communication towards one system of interconnected systems.”

The Chairs of the ENTSO-E Committees and of the Legal and Regulatory Group will also come into office on 1 July. Mr Håkon Borgen, Executive Vice President of Technology & Development at Statnett SF, and Mr Tahir Kapetanovic, Head of National Control Centre at Austrian Power Grid AG, have been re-elected respectively as Chair of the Research, Development and Innovation Committee and Chair of the System Operations Committee.

The Assembly thanked the outgoing Vice-Chair of the Board, the outgoing Board Members and the outgoing Committee Chairs for their leadership, strong commitment, personal dedication, and important achievements to the benefit of the European TSO community.

ENTSO-E’s mandates last two years and can be renewed once.

The new leadership team will work under the framework of an updated ENTSO-E Mission Statement adopted by the Assembly in March 2021. It sets ENTSO-E’s core mission as well as the association’s vision, values, and key contributions. ENTSO-E’s leadership team, Board Members and Committee Chairs. 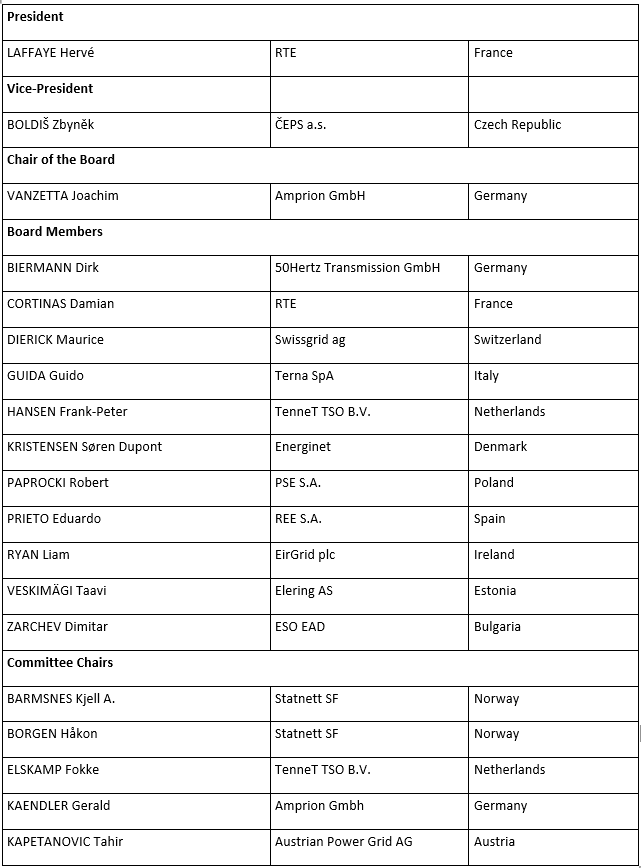