Static Synchronous Series Compensator (SSSC) is a power quality FACTS device that employs a voltage source converter connected in series to a transmission line through a transformer or multilevel inverters. The SSSC works like the STATCOM (STATic Synchronous COMpensator), except that it is serially connected instead of shunt. Its output is a series injected voltage, which leads or lags the line current by 90°, thus emulating a controllable inductive or capacitive reactance. SSSC can be used to reduce the equivalent line impedance and enhance the active power transfer capability of the line. When operated with a proper energy supply, the SSSC can also inject a voltage component, which is of the same magnitude but opposite in phase angle with the voltage developed across the line. Thus, the effect of the voltage drop on power transmission is offset. As a main advantage, SSSCs are inherently neutral to sub-synchronous resonance. This factsheet focuses on voltage levels above 110 kV. 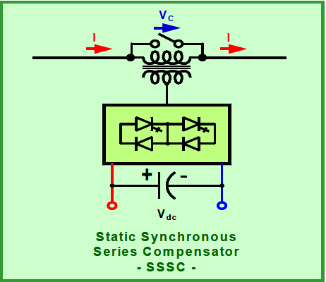 Static Synchronous Series Compensator (SSSC) are part of the family of series controllers within FACTS devices. Two variants are possible:

Conventional SSSC are also known as ASC (Advanced Series Compensator) or GTO-CSC, being the evolution of controlled Series Compensation (SC) devices. The SSSC consists of a coupling transformer, a GTO VSC and a DC circuit. They act as a controllable voltage source whose voltage magnitude can be in an operating area controlled independently of the line current. The SSSC can be considered functionally as an ideal generator that can be operated with a relatively small DC storage capacitor in a self-sufficient manner to exchange reactive power with the AC system or, with an external DC power supply or energy storage, to also exchange independently controllable active power, analogously to a STATCOM.

Transformerless SSSC solutions typically include a single-phase, modular-SSSC injecting a leading or lagging voltage in quadrature with the line current. It can increase or decrease power flows on a circuit and perform dynamic services. The device can operate at multiple voltage levels due to this feature and lack of transformer.

The use of SSSC provide typical advantages related to load flow control, that can also be realised by other technologies like PST or shunt and also offers additional special functions like:

Specific technologies (such as modular SSSC) present additional advantages such as scalability, due to their modular nature, speed of deployment allowing annual adjustment counteracting scenario uncertainty.

In addition to these generic topics, when focusing more particularly on SSSC, research is conducted to detect in advance sub synchronous resonance (SSR) events and mitigate them using transformerless SSSC or novel damping controllers with conventional SSSC. Some research is focusing on enhancing the low voltage ride through capability of wind turbines using a combination of SSSC and controllable series braking resistor.

Description
The application foresees the SSSC functionalities validation, the case study definition enabling the equipment behaviour validation (in normal operation and during contingencies in the grid) by using a power flow simulation software. It is complemented by a simplified case study to analyse the behaviour of the SSSC in electromagnetic short-circuit simulations.

Design
For the SSSC behaviour validation the reference grid includes two transmission lines representing the 400 kV Transmission System with two parallel lines representing the 220 kV lines where the problem to be solved is located, the impedance and the transmission capacity of the 220 kV lines is different. The SSSC behaviour under short circuit is based on a grid model considering that the SSSC has to support 40 kA of short circuit current across the coupling transformer.

Results
The SSSC can solve some of the overload problems detected in the 220 kV grid of the Spanish Electrical System. It has proven to be particularly convenient in old lines (with low capacity) with a power flow very much influenced by wind power production.

Description
At times of high wind infeed and hydro production, 220 kV high voltage lines were overloaded in Torres del Segre in Spain. To relief the congestions, the system operator was obliged to reduce renewable production output at certain instance of time.

Results
Construction of a new 220 kV has been avoided, efficiency of the existing infrastructure has been improved with enhanced dispatching of power flows and an increase in renewable energy integration has been achieved.

Results
Results of power flow analysis of Nigerian 330 kV transmission network without SSSC showed that, there was voltage limit violation of ±10% at bus 16 Gombe (0.8973p.u). The results with incorporation of SSSC showed that, the SSSC was effective in eliminating voltage limit violation and reduced network active power loss by more than 5% of base case (93.87 MW). Therefore, SSSC is effective in solving steady-state problems of longitudinal power systems.

Results
During system faults, the devices performed as expected and entered a bypass mode under fault conditions, no unexpected interactions with the normal protection system. During the testing, Ireland was hit by the tail end of Hurricane Ophelia on Monday 16th October 2017 (Status Red wind warning – the highest threat level possible). Despite strong gusts of up to 156 km an hour on land, there was no structural damage caused to the devices. The units did not cause any damage to the transmission infrastructure. All units remained fully operational through this period.

[1] WASET. Optimal Sizing of SSSC Controllers to Minimize Transmission Loss and a NovelModel of SSSC to Study Transient Response. [Link]

[12] Analysis and Synthesis of Smart Wires in an Electric Power System, A Thesis submitted to the faculty of the university of minnesota byAllan Craig Bekkala, December 2018. [Link]